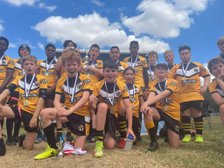 Brixton Bulls U12s were crowned the Champions of London & the South East of England after their 34-4 victory over Bromley Bengals in the Grand Final at Hemel Stags yesterday.

After a nervy start from both sides, the Bulls began to exert control as their set completion improved, and captain Hamza Zidour opened the scoring with a typically powerful run after some good work from dummy half by Player of the Match, Ryan Jones. The duo repeated the trick a few moments later, with Zidour scoring his second after an offload from Jones while half back, Dylan Robson, slotted both goals. Having absorbed some pressure in their own half from Bromley, the Bulls then produced a great team try just before half time, with winger Dexter Kufuor touching down unopposed in the corner after great ball movement from Robson and left center, Etienne Barry.

With a 16-0 lead at half-time the Bulls were in a strong position, but knew that Bromley would hit back. However, another powerful run from Zidour, and a show and go near the line from Robson put the game beyond doubt at 28-0, with Robson kicking one of the goals and hooker Jones the other. Bromley weren't finished yet and managed to squeeze over in the corner. However, Brixton then constructed their best set of the game, culminating with stand off Lawrence Ipoli collecting a double miss pass from Robson to touch down wide on the right. Jones knocked over the conversion to wrap up the game 34-4.

The Bulls put in an outstanding effort across the board with very solid defence enabling them to control the game in attack, and scoring some great team tries.