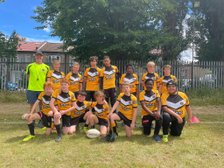 Brixton Bulls U12s qualified for the Grand Final of the Junior League for London & SE East after Brentwood Eels were forced to concede their semi-final against the Bulls.

The Bulls had narrowly finished top of the table on points difference, with their reward being a semi-final against the 4th placed Eels. The Bulls now look forward to re-kindling their rivalry against Bromley Bengals, with each team having won match against each other during two tough matches in the regular season.

The Grand Final will take place at the home of Hemel Stags on Saturday, kick off at 1.20pm.