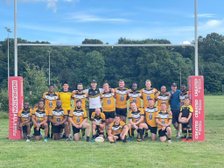 With Elmbridge Eagles recently claiming a win over the Bulls, the semi-final was always going to be a close match. However, the Bulls came back from being 12-0 down at half time to win 26-12.

Heroic defence, some huge shifts in the middle and tries from Onyeji x2, Hancock, Goldson and Amachree saw the Bulls pull the win out the bag to reach their 4th Grand Final in 6 years.

The Bulls will now face Medway Dragons in the Grand Final, following their victory over Wests Warriors A. The sides have faced each other twice already this season, with the home side taking the victory on both occasions.

The match is being played at Rosslyn Park RFC, with a 16:30 kick off. Entry is free and we encourage as many people to come and support the Bulls as possible to help get the victory!