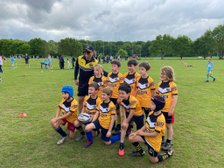 U11s, U9s and U7s all play against Elmbridge

Brixton Bulls U11s, U9s and U7s all travelled to Elmbridge on Saturday to play their first matches of the season against Elmbridge Eagles. The U11s lost a tight game 7-6, despite being made up primarily of Year 5s. The U9s thoroughly enjoyed the match, especially Danny Jones, who scored 5 tries. The U7s all had a great time at their first festival.