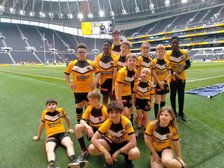 Over 70 Bulls at Cup Final with U12s as Mascots

Brixton Bulls take over 70 people to the Challenge Cup Final, with U12s as Mascots for the 1895 Final

Brixton Bulls took a party of over 70 to the recent Challenge Cup Final at Tottenham Stadium. As part of the event, the U12s were the Mascots and Flag Bearers for the 1895 Final between Featherstone and Leigh.

Meanwhile the U7s, U9s and U11s played in the Primary Festival at London Skolars in the morning, then did a Pitch Parade around the Tottenham Stadium before the main Cup FInal between Wigan & Huddersfield.

This was a fantastic experience for all the players, coaches and parents, which they will remember for a long time!