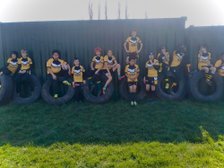 U12s off to a winning start in London Junior League

Brixton Bulls U12s got off to a winning start in their opening game in their London Junior League campaign, with a 40-10 win away at Elmbridge Eagles.

There were stand our performances from captain and loose forward Hamza Zidour, who scored 5 of the 8 tries, full-back Trey Marshall, who scored a brace, and stand off Dexter Kufour, who topped the tackle count. Newcomer Tirae Campbell also contributed a late try after a strong run, while hooker Ryan Jones kicked 4 goals.

The Bulls look forward to their next match against Brentwood Eels at Streatham & Croydon RFC at 12pm on Saturday, 14th May.