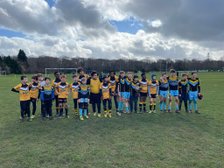 Brixton Bulls U12s won their first match of the season, a 48-40 thriller vs Elmbridge Eagles. The Bulls raced to an early lead thanks to tries from loose forward Hamza Zidour, winger Trey Marshall and half-back Dylan Robson. Elmbridge then hit back to set up a grand stand finish in the final quarter. The Bulls managed to close out the game, however, helped by a typically powerful run from Zidour, a skilful chip and chase by Robson, and a spectacular length of the field effort by dummy half, Ryan Jones.

Many thanks to Elmbridge Eagles for hosting the game, and making the Bulls so welcome. The Bulls U12s now look forward to hosting Keighley Albion on 26th March in a North vs South match for the ages.