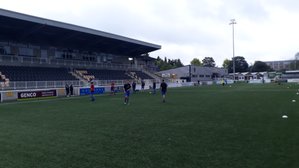 All square at the Stones

Heath followed up their narrow defeat at Corinthian and 5-2 victory over Chipstead, with an entertaining 2-2 draw with Vanarama League South Maidstone's development squad. Despite the morning K.O. we had seen three seasons worth of weather by the time the teams ran ot onto the 3G pitch. Bears were without Tom Bold and Andy Waddingham who were away and Cam Watts who was working. So Lee Carney was joined by Austin Okolo and Renato Carvalho in midfield with George Cousins and Max Howell returning up front with Jamie Taylor. Martyn Flack switched to partner Brad Peters in the centre of defence, flanked by Jamie Robinson and Joe Holvey back from holidays. Conor Evento and Fraser Trigwell shared the goal keeping duties.
Maidstone started fast with great movement and the ball rarely leaving the excellent surface. This resulted in a few shots that Trigwell dealt with easily and one that he had to go full length to push for a corner. At the other end Heath were getting into the swing and both Howell and Cousins wre causing problems for the home side with their crosses. One of these was sliced just over the bar by a defender and another was driven just wide by Cousins. Flack had a header cleared off the line and another go inches wide. With Okolo crunching in to some tackles and Carvalho covering every blade of grass, Lee Carney began to pick his passes.
It was somewhat against the run of play when a lapse of concentration gave a Stone forward time to turn and run at the Heath defence before burying his shot in the corner.
Heath were responded with a Taylor chip that was just wide and a Cousins shot over the bar. HT 1-0
The second half was only a couple of minutes old when A Maidstone forward intercepted A Heath pass and after a great first touch, drilled the ball into the bottom corner of Evento,s net. How would Heath react with several players lacking match fitness and the sun getting increasingly hotter? After a few minutes of sligtly ragged play the Bears settled into their shape again and began to fight back. Rob Godfrey had replaced Robinson and Noel Etherington was on for Okolo. Connor Smith then replaced Lee Carney with Godfrey moving into midfield and Ben Whitely replaced Taylor. With 20 minutes remaining, a passing combination between Whitely and Carvalho released the latter into the box and he finished into the top corner.
Heath now had the belief and another quick passing move got Cousins into the area and despite a tight angle he finished clinically inside the far post.
As the match entered its final minutes Heath twice went close to the winner with a trialist bursting through to be denied by a deflection and then just failing to get onto the end of Ben Whitely's cross.
In the end it was honours even in a match that both teams agreed had been very useful in terms of pre season preparations. We would like to thank Maidstone United for their hospitality and look forward to seeing them again.

Heath next host Knaphill at the old pitch on Tuesday, the unders 23s play next Saturday and the first team complete their friendlies at Tunbridge Wells on the following Tuesday.