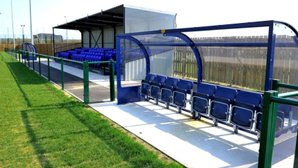 It's been a long, long journey for our members since our club began on the 10th October 1919, playing at Sleets Corner behind the Shelley Arms where we stayed until moving to the Army Camp in 1970. After temporary accommodation at Pixies Hollow in Horsham we had hoped that a move to the new Sports Centre in Wickurst Lane in the early 1980's would secure the clubs future forever but things didn't work out as we'd hoped and in 1998 the bar and social area we ran in the Centre were outsourced and the club was left with no immediate source of income, no headquarters but with the understanding that there would be major development within the village and the Council might well be able to relocate the club away from the Leisure Centre in facilities of our own.

Had we known then it would take 21 years to achieve that dream I'm not sure how many of us would have stayed, years and years of struggle off the field just to survive but somehow against all the odds we did and finally it's paid off with some of the best facilities in the league, a pavilion with 4 team changing rooms, 3 match official changing rooms, social area, bar, kitchen, board room, office, store room and toilets. Outside we have a floodlit ground that meets the standard required for Step 5 football, a further two pitches to the south of the site, one with floodlights for training and the potential of using the MUGAs and other fitness facilities in the Leisure Centre immediately next door. What more could we ask for?

There have been many people who have helped the club along the way, the Parish Council have always given the club their support, our District Councillor Malcolm Curnock who sadly passed away in 2016, was also a member of the football club having been involved for almost 30 years as player, coach, manager and committee member and he ensured the Council were always fully aware of the clubs requirements, it's very sad that he won't ever see the results of his efforts but his partner Lin will be there at the official opening of the Malcolm Curnock Pavilion.

We'd also like a special mention to Horsham District Council's, Trevor Beadle whose job it was to liaise between the Developers, the Council and the Football Club, a truly difficult job for anyone trying to keep us all happy but Trevor went above and beyond to help the football club and he will always be made welcome at the club.

The legalities were completed on Friday afternoon 2nd August but we don't actually pick the keys up until Monday 5th, just a day before our first home match of the season against Loxwood, there are still dozens of jobs to complete, furnishing the social area, board room and kitchen, the bar will be open to sell bottled drinks but draft beer won't be available until the 12th August; food will be available on the night from a van. It will take us time to get things right, we will make mistakes along the way but we will get there.

Thank you to everyone who made this happen.