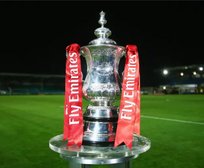 The Emirates FA Cup
New opposition for the Bears when we travel to South East Counties Premier Division side Punjab United in the FA Cup Extra Preliminary Round on Saturday 10th August. Although this will be the first time the club has ever played the Gravesend based team, some of their players and management will feel quite familiar having watched with interest their rise to senior football in a BBC Documentary earlier in the year.

The winners of that game will face a difficult encounter in the Preliminary Round with an away trip to Bet Victor Isthmian South East side Hastings United on the 24th August.

The Buildbase FA Vase
It's new opposition too for The Bears in The Buildbase FA Vase First Qualifying Round having been drawn away to Bagshot from the Cherry Red Records Combined Counties League Division 1, but although the opposition are new, the venue for the game will be all too familiar with the hosts sharing the ground of Camberley Town this season, a team we have visited three times in the last three seasons for pre-season friendly matches.

The winners of that game will face a trip to Cherry Red Records Combined Counties Premier Division side Redhill, a team we of course know very well from their years in the SCFL and more recently in pre-season friendly matches, that game will be played on the 14th September.