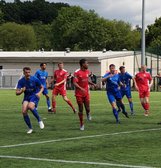 Heath took on Chipstead, from the Bostik League, at the Broadfield 3G without Jamie Robinson, Joe Holvey, George Cousins, Max Howell and Jake Hull but added Ryan Brackpool, Cameron Watts, Lee Carney, Rob Godfrey, Tom Cousins, Kieron Purkiss, Austin Okolo and Fraser Trigwell to the squad that played well in the first friendly at Corinthian..
Heath started off fast and it wasn't long before Jamie Taylor had robbed Chipstead defender, and with the visitors appealing for a foul, squared the ball for Renato Carvalho to open the scoring from close range. Next Carvalho was pulled down just outside the area and Tom Howard Bold placed the ball into the bottom corner underneath the jumping wall.
After a slow start Chipstead began to threaten with their number ten looking particularly lively. A cross from the left found a Chipstead striker at the far post and as Heath appealed for offside he finished clinically across Conor Evento . But it was not long before Heath regained their 2 goal cushion. Howard Bold line up another free kick, a little further out this time and as the wall stayed grounded he curled his shot into the top corner. Half Time 3-1

As the sun blazed down and both side started to make changes the game lost some of its flow and Chipstead again reduced the arrears with a header from a corner that found the net off the underside of the bar. Ben Whitely, Rob Godfrey, Noel Etherington and Austinj Okolo entered the fray and Heath continued to push forward. Etherington on the overlap, crossed for Carvalho to flick the ball to the far post where Jamie Taylor tucked away Heath's fourth. George Cousins' brother Tom came on to partner Ryan Brackpool and his long ball was headed on by Carvalho to put Taylor clear, only to be brought down as he prepared to shoot. Taylor himself got up to take the penalty comfortably make it 5-2 and round off a very good performance against a side from the league above.
Heaths next game is at Banstead Athletic on Tuesday 16th July.