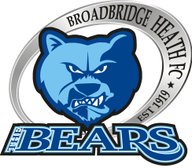 Heath played their last ever game at the Leisure Centre against near neighbours Loxwood and from the first whistle showed they were determined to sign off with a bang. 17 year old Cameron Watts kept his place at left back and Andy Waddingham returned from holiday to partner Lee Carney in midfield. Jamie Robinson returned from injury to join Renato Carvalho, Louie Blake and Conor Evento on the bench. Ollie Moore failed to recover from the injury picked up against YMCA.

Heath went at Loxwood from the start and on a bumpy pitch got the ball forward and wide quickly with Devon Fender, George Cousins and especially Mason Doughty running at the visitors at every opportunity. From one of these runs, Doughty unleashed a tremendous shot that Matthews, in the Loxwood goal, did well to block. When the rebound was worked back to Doughty he again thumped it goalwards and Matthews again saved but within seconds the Heath's wide-man third effort found the bottom corner for 1-0.

The visitors tried to get a foothold in the game and showed they could play some effective football and keep the Heath backline on their toes to stop Kieron Thorp being called into action. Then after 20 minutes Fender and a defender chased a through ball and as the Heath front man threatened to get in on goal, Matthews came out of his area and stopped the ball with his hands. The linesman flagged and the referee blew for the free kick and gave the keeper a red card. Things got worse for Loxwood when Doughty stepped up to smash the ball over Hugo Cowan, who had donned the gloves, to extend the lead. The tempo of the game dropped towards half time until Andy Waddingham volleyed home a loose ball to make it 3-0 at the break.

Loxwood set their stall out in the second half to limit goal scoring chances for Heath. Consequently, most of the game was played in the visitor’s half. Fender, Jamie Taylor and Doughty all came close with Cowan pulling off and excellent save from the latter, before George Cousins met Fender’s nod down to volley into the far corner. 4-0.

The visitors did not give up and as the game entered the final 15 minutes began to enjoy more possession in the Heath half without giving Thorp any cause for alarm. The scoring was completed with Andy Waddingham getting his second goal, driving in from the edge of the box, the ball actually going through the net, causing a little confusion initially, to make it 5-0. This was perhaps a sign of how tired the old stadium has become with all the attention now focused on the brand new Leisure Centre.

So with just the under 23s final match on Thursday night, an era has come to an end and Heath supporters will look back at some wonderful memories seen from a distance across the track, not least the night Heath won promotion to the top tier in Sussex football, only losing 1-0 after extra time to Isthmian League Lewes and let’s not forget the night the Bears beat Horsham for the first time in a senior match.

Even those fairly recent matches seem quite distant now as manager Steve Painter has assembled the best squad of players in the club’s history, the majority of whom are former youth team and junior players, the first team has secured the targeted best ever top six finish and we are about to move into our new home. The club has the chance of a lifetime to develop into a major player at all levels and provide the best possible football for local players and supporters alike.