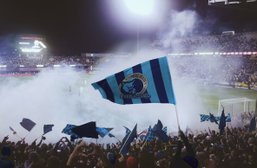 Bears Run Comes To An End

Heath’s 8 match unbeaten run came to an end in the penultimate match to be played at the old Leisure Centre stadium, as second place YMCA proved more clinical in a typical end of season game played in blazing sun on a difficult pitch surface.

Heath were without skipper Tom Howard-Bold, Andy Waddingham and Jamie Robinson, so Dean Wright continued at right back and Martyn Flack drew the short straw and moved across to left back. The bench consisted of Renato Carvalho, Under 23s top scorer Tom Shergold, youth team prospect Cameron Watts and goalkeeper Conor Evento.

The game started in a lazy fashion in the heat as both sides had a few tentative attacks but this changed on 15 minutes when Tony Nwachukwu got behind the Heath defence and Ryan Brackpool coming across to cover mistimed his challenge and the referee awarded the visitors the penalty which Dean Bown buried.

Things got worse for Heath 5 minutes later when a free kick was awarded to YM 10 yards outside the Heath box and an excellent delivery from Luke Gedling and a sharp run and header from Guy Harding, and Heath were 2-0 down. The hosts responded when Aaron Jeal saved a close range effort from Devon Fender and George Cousins fired the rebound wide. There was controversy shortly before half time when a YM defender appeared to foul Jamie Taylor as he attempted to shield the ball in the box but nothing was given.

Half time arrived and both teams decided against the walk back to the changing rooms and found shade around the stadium. Heath were forced into a change with Ollie Moore unable to continue through injury and Steve Painter changed to 4 3 3 moving Dean Wright forward and Devon Fender back to partner Carney in midfield. 17 year old Cameron Watts came on at left back to make his 1st team debut after some impressive youth and under 23 performances.

Heath began to get on top with several inviting crosses from both flanks going unfinished or ending with a corner. Then from a Brackpool long throw Jeal allowed the ball to slip through his hands and into the net. Heath celebrated the equaliser but their joy was over-ruled by the referee who blew for a foul on the YM keeper. .

Heath kept going forward and Watts who had put in some good interceptions in defence twice strode out to switch play and release Mason Doughty to firstly whip in a cross that Fender failed to connect properly with from 8 yards out and then smash a drive that Jeal brilliantly turned over the bar.

As Heath threw men forward they were bound to be vulnerable at the back and Thorp kept them at bay with a great reaction save before Nwachukwu made the game safe for the visitors with 9 minutes left.

Not a game that will remain long in the memory with the visitors more clinical finishing earning them victory and some revenge for the Bears winning Bear’s win at Gorings Mead earlier in the season.

So Heath go into their last two fixture at home to Loxwood and away to relegation threatened Arundel, needing 3 points to secure their beginning of season target of top six. With the under 23s also having a successful first season and a record number of ex Bears youth team players appearing in the first team, the club can’t wait to get into its new headquarters and start moving forward on all fronts.