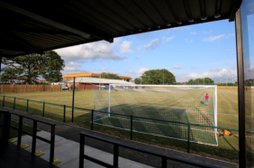 The Bears Are Home at Last

Heath celebrated moving into their new ground with a 2-2 draw to entertain the crowd of 330. Local rivals Loxwood, who were also the last opponents at the old ground, twice took the lead but were pegged back by a Heath team determined to put Saturdays defeat behind them. The honour of scoring the first Heath goal at the Countryside Stadium fittingly fell to the longest serving player Martyn Flack.

After a bright start, when the Bears forward line repeatedly threatened the visitors goal only to have shots blocked or saved by Matthews, the visitors took the lead. A Loxwood defender appeared to handle deep in his own half but as play was waved on, a slip on the half way line released Tom Frankland to finish inside the near post.

Heath bounced back and had headers from Flack and Tuck narrowly over the bar and shots from Taylor, Howell and Cousins comfortably saved by Matthews. At the other end Loxwood had several dangerous deliveries into the Heath box that had no final touch but at half time the score remained 0-1.

Heath came out determined to get level and with the midfield of Carney, Howard Bold and Weller driving them on they forced the visitors back with Taylor latching on to a Weller through ball and with only Matthews to beat the normally clinical marksman shaved the far post. Then Tom Howard Bold’s inch perfect free kick saw Flack dive in to bury his header inside the far post for the equaliser. Heath now were on the front foot and Cousins drove wide followed by a hooked effort from Taylor that was off the mark.

Loxwood began to fight back and from out near the touchline Frankland delivered a free kick that Trigwell lost the flight of and the visitors were back in front. Such a freak goal clearly stunned the Bears and for 5 minutes Loxwood looked to push home their advantage. Slaughter tried his luck from distance, a wicked cross to the far post was missed by everyone and then Trigwell saved a close range drive.

Having survived this uncomfortable spell, Heath battled back and with time running out Max Howell was fouled off the ball and the assistant referee immediately flagged. However with the Heath attack in full flow, referee Bloggs played the advantage, enabling Cameron Watts to feed Cousins for Heath’s second equaliser. The Loxwood players insisted that the referee speak to the linesman but having satisfied himself that the foul had been on a Heath player, the referee duly awarded the goal. Heath now pushed forward for a winner but the whistle went with honours even.

So the first ever game at The Countryside Stadium ended all square with 4 goals and two comebacks for the big crowd to enjoy. There was a great family buzz around the stadium with at one point ‘when the Bears go marching in’ being heard from the kop end. We look forward to welcoming back as many as possible of those 330 people who shared this historic night.

The next challenge is the BBC live streamed FA Cup tie at Punjab United in Gravesend on Saturday. For supporters planning to go please remember for broadcasting purposes, this is a 12.30 K.O.