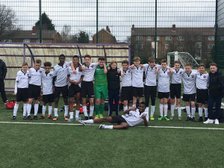 The history makers back to back cup finalist

This Sunday see’s Bromley FC take on cup-holders, Kent Football United in the Kent Reliance U14 Boys Youth Cup, to see who can get silverware for the 2016/17 season!

The first round of the Cup this season saw our Bromley FC winners at Under 13 level last season. Have the luck of the draw on their side, receiving a bye into the second round.

We started our journey to the final in the second round of the competition against Corinthians FC. Bromley initially went a goal behind, but Luke Cook managed to bag an equaliser. With extra time looming, Paris Jackson managed to slot the ball under the keeper just seconds before the final whistle, putting us through to the third round.

The third round saw us travel away to Kings Hill FC. We were able to grow into the game, and ended up dominating proceedings. Liam Vincent scored the opening goal, which was followed by a hat-trick from Odeluga Offiah and a 25 yard volley from Rory Bryant, putting our Bromley Under 14's firmly into the quarter final, winning 5-0.

We now faced Ebbsfleet United in the quarter-final match, which was our first game back after the Christmas break. Bromley squad were raring to go, with Henry Farrant scoring on our first attack of the game. Liam Vincent then added a second direct from a free-kick on the right, before goals from Luke Cook, Odeluga Offiah and Paris Jackson finished the game off in the second half, putting Us into the semi-final with another 5-0 win!

The semi-final against Tunbridge Wells, was one of those extra time, nail biter of a match! With both team’s wanting their place in the semi-final, neither was prepared to make this match easy! After strong display’s from both teams, the score was 0-0 at full time. Onto extra time, and it was a winning goal from Paris Jackson that managed to prevent the pending penalties, and secure Bromley Under 14's a place in the final!