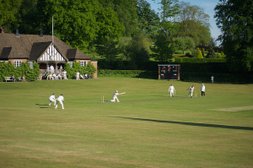 The club was formed in 1923 as Brook and Sandhills Cricket Club (Sandhills being the hamlet adjacent to Brook). In those early days, and indeed up to and including the Second World War, keenly contested matches were played against other local village sides, with post match entertainment across the road at the Dog & Pheasant and little has changed: the picturesque ground in its rural setting and with its excellent wicket remains a popular venue for cricketers from far and wide.

After the war, the fixture list expanded to include opponents from the South Coast to London, and experienced players joined the club. The Sydenhurst Ramblers (originally a country house team from the Sydenhurst estate a few miles away) also started at that time and still plays some matches at Brook.

Up until the late 1980s, Brook continued to play friendly cricket with two Saturday and Sunday sides and a colts team. The pressure for league cricket, however, was irresistible. In 1988, the club joined the Surrey League becoming champions in the first season. The club has continued to be successful in the Saturday leagues and evening cup competitions as well as playing some of the best Sunday cricket in the west of Surrey and undertaking regular tours to Guernsey and Sark.

In 2013, the club joined the more local Saturday I'Anson League returning to its early roots, and has been promoted as champions of its division four years in a row. The Sunday side continues to enjoy a full fixture list and the mid-week side entertains the MCC every other year as well as international touring teams. The thriving juniors section has a number of age groups entered in the Two Counties Youth League.

The Club, which is Clubmark accredited, has adopted Codes of Conduct for members, guests and junior players to ensure that it offers high quality community cricket in an environment that is safe, respectful and child-friendly.