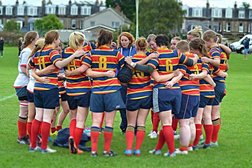 A decade to celebrate - 10 years of Women's rugby at Wardie

Broughton welcome Heriot's Blues to Wardie for the first ever North Edinburgh Derby in a historic weekend at the club.

On 5th September 2009, the newly formed Broughton Women played their first game, a friendly away to Grangemouth. The borrowed kit from the gents saw the heavy cotton strips largely drown the girls and perhaps offered their opponents the added advantage of just too much material to grab onto and slow the runners down!

The inaugural fixture followed several months of discussions with the Scottish Rugby Union, which finally resulted in agreement that would allow women's rugby to take up residency at Wardie Playing Fields in the heart of North Edinburgh.

In their initial year, the Broughton side were required to take their place in the Development League, where competitive fixtures were at a premium. Such was the progressive mindset of the club to drive the game forward, fixtures were set up against the then champions of Germany SC Neuenheim plus sides from France (Meurthe et Moselle) and England (Hammersmith & Fulham plus Northwich Ladies) - indeed, it was such a busy card, the team played in more 15-a-side games than any other side in women's team in Scotland that season.

The following season saw the side take their place in National League 2, with some telling results including accumulating over 100 points in two games against the Dick Vet College. It was a fantastic runners-up spot for the side and it was also a successful year for the Broughton family, with our Men's side winning their League competition.

The Broughton trophy cabinet was kept busy when, in just their third year of existence, silverware was to be put on display after a final day showdown against Morgan in 2012 saw Marius Briedenhann's Broughton gain revenge for their earlier loss in the year with a 29-0 win to lift the Women's Premier Division C title in front of a bumper home support.

At the Club's AGM in May 2013, Rebecca Long, the Women's team Prop, became the club’s first female president, and at 30 years of age, she was also the youngest person to undertake the role in the Scottish game.

In April 2014, new entrants into the Women's game Ayr Ladies were Louise Forsyth's side's opponents in the end of season RBS Bowl Final clash at Dalziel RFC as part of Finals Day.
The sun shone on the righteous that morning as Broughton fought hard against an Ayr side, then in Division 2, to record a 17-7 win.

Back to back Cup success was to be thwarted twelve months later in the Plate semi final against a strong Stewartry side who, on their home patch, run out victors and defeat Aye in the Final.

Broughton continue to be a progressive and well respected club and every year, the squad welcomed many new faces, with seasoned campaigners and raw recruits having never played the game before, embracing the all-inclusive sport at it's Granton base.

Over the last five years, the Club, under the talented stewardship of Coach Forsyth, has continued to make progress on and off the field in what has become the one of the fastest growing team participation sports, which in turn has seen competition within the game increase at domestic level.

In November 2016, the Club were saddened to report the death of stalwart Alistair Leslie. Alistair was a fantastic friend and supporter of the Women's team, enjoying many a Sunday afternoon cheering on the ladies up and down the infamous Wardie slope.

Last season saw Broughton celebrate their first ever Internationalist. Vanessa Hagen was selected to play for her home nation Germany against the British Army in Heidelberg. In addition to this, Lani Baird was also celebrating her call-up to the Scottish Students. A fantastic double achievement within the ranks.

Season 2017/18 started in successful fashion, with a 17-36 win on the road at Melrose.  It was a victorious return for Forsyth to the Greenyards, where her photo adorns the clubroom wall from her time as a young player some twenty years ago. It was to be the catalyst behind a four match unbeaten run only to be denied by Kirkcaldy before defeating them seven days later in the Sarah Beaney Cup.

With proposed changes to the Scottish Rugby calendar in the pipeline subject to confirmation by all stakeholders, a 'mini-season' from August til November 2018 took place. This was a transitional period not only for the domestic game but for Forsyth's side who embraced a plethora of new recruits to what has become the largest growing female sport in Scotland. It was a better year for the Club's preferred bus hire firm with away trips to Oban, Howe of Fife and Garioch scheduled for the tight block of games.

2019 saw very limited minutes of rugby played at the beginning of the year. Friendlies pencilled were erased out and after defeating Lismore Ladies, the team of rookie recruits took on Premiership outfit Corstorphine Cougars. Whilst an air of inevitability over the outcome may have keep the Bookies in business, Forsyth noted, "This season has seen us build solid platforms in terms of squad depth and game structure, laying the foundations for 2019/20 season.  You are all deserving of kudos following your dedication, commitment and improvement."

And so to Season Number 10. A significant milestone and to have been able to deliver Women's Rugby in North Edinburgh for a decade has been testament to those who had belief in the project from day one, those who fought tirelessly to make it happen and most importantly, the Coaches and Players. Since that first trudge out onto the muddy field wearing an old set of the lads jerseys almost ten years to the day, around 150 females of various nationalities, ages, shapes, sizes, ability, creed, colour - you name it, we've embraced it.

This Sunday, ten years on, we play Heriot's Blues Women. Our first against the 'new' kids on the block and our inaugural North Edinburgh derby. Women's rugby continues to evolve in Scotland and Broughton continue to be at the heart of this sea of change. We've love you to come along and watch our first home clash of the campaign. 2pm, Wardie - be part of it and get behind the girls.