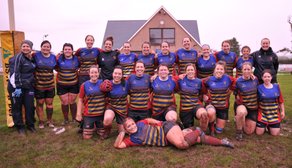 This year not only sees Broughton celebrate their 10th season of delivering Women's Rugby in North Edinburgh, but earlier this month, the team notched up their 150th match - a 17-all draw on the road at a dreich Dumfries against Annan Warriors.

From the first game in the muddy Grangemouth soil in 2009, wearing the previous season's Men's XV cotton strips - twice the size at best, doubling the weight of some of the unfortunate back division in the rain - to developing into a nationally respected and now thriving Women's section, the journey has been a remarkable one of pride, passion and progress.

The inaugural seasons were under the guidance of former Men's player Doug McClure. McClure, now an integral part of our BATS associated club Edinburgh Accies, was instrumental in building the foundations for what has turned out to be a side that has seen well over 150 females participate in a Broughton jersey over the ten year period.

Doug was delighted to note the success of the team thus far; "I’d like to congratulate the Women’s team on playing their 150th game and celebrating their 10th anniversary. It has been superb to see the Women’s team grow and flourish over the years and I am sure there are many more years ahead.

"I knew at the time of taking the ‘original’ team to Broughton RFC that it would be a place they would be welcomed and made to feel equal. They faced and overcome lots of hurdles from the Union to become Broughton Women and have proven over and over again that it was the right thing to do."

Taking over the reigns from McClure after his period in charge was Namibian-born Marius Briedenhann. At the twilight of his playing career, Breidenhann turned his attentions to further developing the nucleus of a side who had shown sizeable progress over a relatively short space of time.

The team's first silverware success came at the end of the 2012 season following a final day title decider showdown against Morgan which saw Broughton score 29 points without reply to lift the Women's Premier Division C title in front of a bumper home support. Ok, to metaphorically lift the title as no-one was available to attend with the trophy for the 'winner takes all' post-match presentation...

Now residing in Melbourne Australia, Marius sent his best wishes all the way from Down Under, "Massive congratulations in reaching this milestone. I am truly proud and humbled to have been involved in playing a small part with the ladies team.

"This team and club have just gotten stronger and can look forward to many more years of rugby and friendship."

With the sunnier climes and the aroma of BBQs on the beach luring the Briedenhann family across the globe, Broughton were on the look out for a new Coach for the third time in almost as many years.

After electing the Club's inaugural Female President in the shape of Rebecca Long at the AGM in May 2013, the forthcoming season saw the team led for the first time by a member of the same sex. Former Edinburgh University Coach and player of proven pedigree Louise Forsyth took over the reigns.

A transitional opening season saw hard yards put in on the training paddock and players progressing with confidence fuelled gusto as the year went on. Back to back victories against Aberdeenshire Quines and Lismore Ladies boosted morale ahead of the team's first ever Cup Final.

With Murrayfield unavailable and Broadwood unable to accommodate all games, the climax of the Bowl competition took place at Dalziel RFC against newly established Ayr Ladies.

Amy Neill got Broughton off to a flying start and despite Ayr then taking the lead, Ceri Lynn raced in for a try to put Broughton ahead at the interval. The second half was an intense affair with only one further score recorded - and it was a Broughton one with Ivana McConnell galloping in from inside her own half to set up the easiest of conversions for Player of the Match Stacey Donaldson to covert. Cue scenes!

The following season almost saw a return to Finals Day however the opportunity to add the Plate to the Bowl in the Committee Room was thwarted by Stewartry in the semi final.

Since then, Coach Forsyth has built up a respected reputation across the rugby community in developing talent from rookies to seasoned campaigners in equal measure.

Forsyth said, "I have been with Broughton as Ladies Coach since 2014 and still I am in awe at the commitment and constant willingness to learn from all the players.

"The club is seeped in history and I am proud to help write this current chapter for the club. This is our 10th year which is no mean feat for any club and even more so for one as small yet mighty as Broughton.

"I just want to wish all the players a massive congratulations from me and the club, in playing in the 150th game. The players always give 100% week in, week out and I’m proud to help steer this Broughton juggernaut onwards to the next 150 games."

Next up for Broughton this Sunday at Wardie Playing Fields is Garioch Ladies. Kick-off against the National 1 League leaders is 2pm. We'd love to see you on the sideline and getting behind your team.