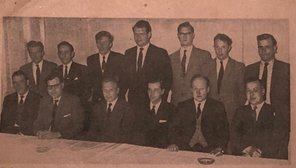 A former Broughton FP player, Captain (1957 & 1958), Secretary and latterly Hon Vice President, Ronnie was also a long serving committee man and selector for many years.
Described as “one of nature’s gentlemen” by club stalwart Charlie Porteous, Ronnie was a tremendously gifted rugby player and a great mentor to those youngsters of the day.

A skilful fly half on the pitch, Ronnie was often to be seen off it in the Clubhouse chewing the fat with his lifelong friends and team mates Bill Ewen and Jake Harris.

Porteous fondly recalls, “Ronnie was a gifted sportsman turning out in most backline positions, but I remember him as 2nd XV captain when I joined from school in '63, already on the committee and selector; softly spoken, patient, kind, always offering advice and encouragement to we youngsters and something of a hero of mine when I started at Wardie.

“Eventually increasingly serious family commitments gradually consumed more of his time and he drifted away, unable to continue active membership. Ronnie was definitely one of "The Good Guys"!”

Those comments were echoed by Past Club Captain Alan Hoy, who reinforced the many qualities of his recently departed former club mate.

Speaking from Australia, Hoy said, “I’m really sad to hear of Ronnie McAlister’s death. I always remember him as a very quiet and astute observer of our playing era.

“In my first year as club captain, Stuart Sangster was chosen as the club’s official coach. Stuart unfortunately relocated down south for business reasons before he could commence his role.

“Ronnie, at that time, was Chairman of the selection panel but without hesitation put up his hand to help implement the coaching regime that Stuart had endeavoured to introduce. This was based on the coaching manual of the Springbok coach, Ivan van Heerden!

“He just went about things in his quiet way and was such a big help to me since the major activity at the club at that time was the construction of the clubhouse. A great clubman and no doubt friend to many in the club.”

Ronnie is pictured front row, third in from the left, with the rest of the Club Committee in 1963.

McALISTER
Ronald (Ronnie) (Formerly Claremont Road, Leith)
Peacefully, at Victoria Hospital, Kirkcaldy, on Wednesday, January 1, 2020. Ronnie, beloved husband of the late Frances, much loved dad of Ross and Graeme and a loving grandad, formerly of Scottish Life and Leith St. Andrew's Church. A funeral service will be held at Warriston Crematorium, Lorimer Chapel, on Monday, January 20, at 2 pm, to which all are welcome. Family flowers only please, however, a retiral collection will be held on behalf of Bethany Christian Trust.