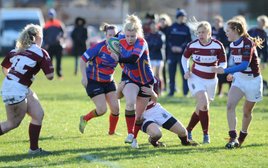 Despite a frustratingly disjointed pre-season fixture card, Forsyth's side head into their first game of the newly formatted Sarah Beaney Cup competition.

With 21 players fit and available for selection, Captain Dani Downs will lead her team onto the infamous Wardie slope in search of silverware against the National 2 side.

Whilst the story of the two clubs sees over a decade or so of rich history to share, the pair have only locked horns on two occasions, once in league and another in friendly action with Broughton coming out on top 21-0 in National 1 back in October 2011 and a 52-0 friendly victory in March 2014.

With both clashes being played at Inch Park, the Cup tie will be the inaugural outing at Wardie since the formation of the Broughton team, born out of the South Edinburgh club. Since then, the clubs have enjoyed mixed training sessions and several players have been afforded the opportunity to pull on respective jerseys via the dual registration system.

Kick-off at Wardie is at 2pm and your support on the sideline is welcomed.

The Sarah Beaney Cup format for 2019 sees Broughton feature in Pool 7 of 11 groups, the pools being drawn on a regional basis in line with the club-led suggested format of a split of Premiership, National and Regional teams. Clubs, based on their pool standings, will progress either into the Sarah Beaney Cup, the Women's Plate or Bowl competitions. With Falkirk having withdrawn from the Tournament, the winners in this tie will head into the main tournament. These ties, once drawn on 19th March, will take place on the 31st March.