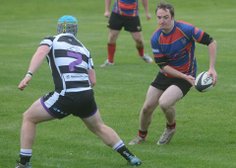 Tennent's East 1: Five-try flourish as Broughton rally at The Rec

Broughton moved up to 5th place in the Tennent's East Region 1 table with a bonus point victory on the road against North Berwick.

Richie Todd's men were victorious last time out on the road with a tremendous and hard fought victory on the road against Hawick Harlequins and they looked to come back up the A1 with a similar outcome against the basement dwellers from East Lothian.

The hosts have had a difficult start to the season and find themselves at the foot of the table, however Broughton knew that nothing but a strong 80-minute performance would ensure the victory they desired.

It was the men from Wardie who started well and were on the scoreboard early. A penalty was hoofed deep into the North Berwick twenty-two and following a well worked line-out the pack drove over from 10 yards out, hooker Rory Stewart coming up with the ball. Peter Whelan taking over the kicking duties this week added the extras to make it 7-0 to the visitors.

Broughton added to their tally just a few minutes later. After dynamic play by the men up front, some excellent handling from the backs allowed Connor McAndrew to go over on the right wing. Whelan again successful, adding another two points with the boot.

Under the watchful eye of the Law, the hosts rallied and saw themselves edge more into the game and whilst enjoying a sizeable share of the pie of possession, they struggled to penetrate the resolute Broughton defence.

The hosts were dealt a further blow midway through the half going down to 14 men having lost a forward to an injury that saw the metaphorical insult added to it with no replacement permitted due to them unable to field a full front row.

Both numerically superior in personnel and the scoreboard, Broughton extended their advantage further after some quick thinking by the Broughton backs. Fly-half Jamie Blackwood sent a kick deep into the danger zone and despite an excellent effort, the covering defender was only able to spill the ball into touch.

Sharp thinking by Andrew Tainsh saw him chuck a quick line-out to Conor O’Reilly (pictured), who enjoyed his best performance of the season, allowing the Irishman to score his first try for the club and put the visitors within one score of a bonus point early in the game.

In an excellent first half display, not everything went Broughton’s way with veteran front-row Chris O’Neill earning himself a ten-minute rest on the touchline following a high tackle.

Numerical parity on the park may have been restored, albeit temporarily, however it was the tourists who struck again and the bonus point was secured before half time, Broughton’s fifth of the season, with another well taken try.

Following a fine first half display Broughton looked to really pile on the pressure in the 2nd half however it was the home side that started the second period brighter.

The Rec finally came to life for the beleaguered North Berwick support and following a spell of decent possession in Broughton territory, nifty footwork from the home fly-half manufactured a clean line break and a score to get them on the board.

The wet conditions made flowing rugby difficult for both sides and there were errors a-plenty. It was Broughton who were next on the scoreboard though, extending their lead further and putting the game beyond doubt.

Pressure was applied to a North Berwick line-out ten metres from their own line allowed the visiting pack to recover the ball. Moments later No.8 Craig Wishart crashed over from close range.

Broughton’s discipline let them down at times in the second half, and once again found themselves down to 14 after young winger Robbie Robertson incurred the wrath of the Ref after a deliberate knock-on.

Despite the deficit, North Berwick showed good resilience and scored a 2nd try late on. Strong running out wide resulted in a well taken score, but the visitors will not have been happy with their tackling.

It was far from a perfect performance from Broughton, especially in the second half, but a bonus point victory away from home is just the encouragement the team require with two tough fixtures in the next two weeks at Duns then a Christmas cracker at home against Portobello.

*Words with thanks to Robert Cockburn*