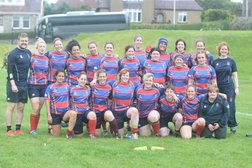 Broughton Women will take on Lismore and Falkirk in the preliminary round of this season’s Women’s Cup Competition.

The trio have been drawn together in Pool 7 of 11 groups of three, playing a round-robin style, with the pools being drawn on a regional basis in line with the club-led suggested format of a split of Premiership, National and Regional teams.

Round 1 will be played on March 3 at home where they kick-off against Lismore then two weeks later they travel to take on a Falkirk side who will feature a familiar face or two in what will be the first full competitive match between the Clubs. They will also play each other in February in a pre-season training / bounce game.

Clubs, based on their pool standings, will progress either into the Sarah Beaney Cup, the Women's Plate or Bowl competitions. These ties, once drawn on 19th March, will take place on the 31st March.