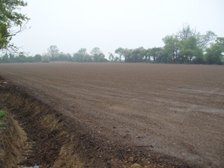 In 2008 the club bought &frac34; of the adjoining field to the north of the existing grounds. Planning permission was applied to convert the area from a derelict field into a playing field and car park, with the help of Bateman mole associates (a local architects practice). After various professional reports and discussions with the Local Council about the proximity of a pond, potentially containing Great Crested Newts, planning permission was granted and works cracked on!!

The work was carried out by White House Contractors (one of our sponsors), which included under-pitch drainage and levelling. The first game was played on the pitch at the end of the 2009/2010 season, to a touring French vets side; and the official opening was in October 2010. Another superb asset for all sections of the club!! Well done everyone involved in this development..