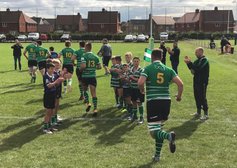 Buckingham's under 12s were invited along to support our 1st XV team at their home fixture last Saturday against Wimborne. This was the inaugural 'Guard of Honour' event that the Mini's section have attended, which is all part of bringing our club sections together and increasing their interaction under the 'One Club' initiative this season.

Our under 12s welcomed both teams to the pitch, with a Players Tunnel, then continued supporting our 1st XV by running water on for players and chasing down the match ball when kicked out of play.

Thanks also to all of our u12s parents who ran a BBQ on the day for supporters and Congratulations to our 1st XV team, for overcoming a first half deficit and coming out on top against Wimborne at the end.