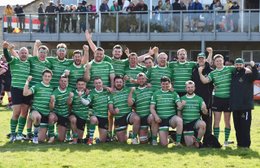 After 5 years in charge, Andy White has announced he will be stepping down from the Mens 1XV Head Coach position. He will, however, continue to be involved with the club (see below). Andrew and I have been working with a core team to agree a future Mens 1XV coaching structure and this brings opportunities for others to now take the team forward. The changes are as follows.

• Andy is appointed as a specialist backs coach as part of the Director of Rugby team, working with coaches and teams who would benefit from enhanced backs skills
• Andy will also take on responsibility for the U23’s representative side
• Richard Hill (who was the Mens 1XV Assistant Coach) is promoted to Mens 1XV Head Coach, providing continuity for the club and our ethos of promoting from within. He will also retain his role as Forwards Coach for Mens 1XV
• Jamie Lee is appointed as 1XV Backs Coach and Assistant Coach to Richard – Jamie has a season long injury so steps in to support Richard
• Jim Barker is formally appointed as the Mens 1XV Team Captain (Jim will nominate his vice captains in due course)
• In recognition of Jamie Temple’s contributions, he is appointed in the revitalised role of Club Captain, representing the 1XV/2XV/3XV off the field at events, dinners, etc. and becomes the link between players and the committee
• Julian Scarr remains as Team Manager and George Gulliver as Touch Judge

Firstly, on behalf of the club, I would like to thank Andy for his investment in bringing and maturing the Mens 1XV squad to its highest ever league position. He certainly ends his tenure on a high and the squad in a very strong position. I also look forward to working with him in his new role(s).

Secondly, I would like to welcome all the new appointments to the team and wish them every success in their new roles for the coming season.

Please find below a statement from Andy

‘It has been a huge honour to have played a small part in the history of this great grass roots club. I have loved every minute of my time here and have been very fortunate to work with great coaches and support staff, and with great players. Over that time, we have built the foundations for a successful Club, both on and off the pitch, and last season’s finish in the league was a reflection of the progress that has been made.

I felt it was the right time for me to move on and a new Head Coach to come in and build on the work that has been done. It is always difficult to leave somewhere that has become home and I will always be very grateful to everyone in Buckingham for the very warm welcome they gave.

In particular, a huge personal thanks to Finlay, Leachy, Cooky, Si Smith and Dave Toone for their support and encouragement throughout my time at Buckingham, and for their backing in building a Buckingham playing squad to be a competitive force in the league.

I realised what a special place it is to play rugby when you’re wearing a Green & White shirt. This is entirely due to the incredible Buckingham supporters and I thank you all for your support over the last few seasons.

Finally, I would like to thank all the players and support group I have worked with, especially the two fantastic captains Pat Ockendon and Jamie Temple who have been incredible leaders on and off the pitch. Buckingham has been a huge part of my life for many years and I wish the senior section the best of luck for the future’