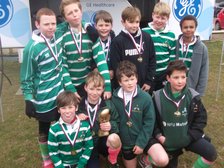 "A great days’ rugby. A real pleasure to watch and be a part of."
Richard Ramsdale, Head Coach

Buckingham RUFC Under 11’s team played their first tournament at Amersham and Chiltern today (15th March 2015) in their new shirts, kindly sponsored by Buckingham Group Contracting Limited and came away with the age group winning trophy!

Whether it was the new (now called lucky!) shirts, the slight chill in the air or hearty breakfasts that spurred the team on, but without exception, all played strong competitive rugby from the first whistle for each of their 5 games.

All the team worked well together and supported in rucks and mauls to recycle the ball. Their overall play was very well executed against some quite challenging opposition. One team told me they thought Buckingham would be their biggest challenge of the tournament – needless to say that game resulted in a draw.

A great days’ rugby. A real pleasure to watch and be a part of.