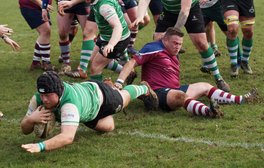 After some discussion with Jim Barker, Jim has decided to relinquish his role as Captain of the Men's Senior 1XV. This was a tough decision for Jim, but with the continued success of his business and other personal commitments, Jim judged that he could not invest the time and commitment required to Captain the team both on and off the field.

We appreciate Jim's candidness on this and the good news is that Jim remains fully committed to the club as a player.

After taking some time to consider his successor, the club is delighted to announce that, with immediate effect, Matthew Payne has agreed to be the Men's Senior 1XV Captain going forward into the new season.

Matt is well respected within the team and a very experienced first-team player. The club is delighted that he has agreed to take on the Captain's role and we all look forward to working with him on and off the field in the future.