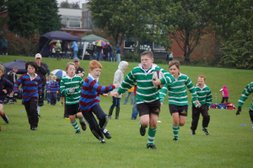 The Buckingham Bullets new rugby season started at a cold and windswept Chesham Rugby Club, for the first match weekend this year. There was some very good rugby played in both the attacking and defending phases of the games. The new boys also did very well and I think we have some very valuable additions to the Buckingham Bullets squad for this year. We played a mixed ability teams and this proved that the whole squad has reach a very high standard for the start of the season.
Game One
Buckingham = 50 Chesham = 0
The Bullets came out in this game with a very high intensity and blew Chesham off the pitch in the first few minutes of the game. After this they settled into a good rhythm and started to put points on the board on a regular basis. Buckingham had many attacking options and Chesham only got into the Buckingham half of the pitch 3 times in the whole game. The defense was of a very high standard. The contested scrum went very well and the Bullets didn’t loose a scrum either with or against the head all game. The lineout worked well and presented future opportunities for improvement in this area of the game.
Game Two
Buckingham = 60 Chesham = 5
The Bullets changed 6 of the 9 players in the team from the first game. This game went the same way as the first game with the Bullets soon getting into a good rhythm and putting points on the board on a regular basis. The scrum worked just as well with a completely new set of forwards. The lineout was still working but not a very consistent quality of ball for the scrum half. This put a lot of pressure on the mid field and the forwards. Much of the attacking plays in this game came from the mauls; Buckingham seems to be getting better at this aspect of the game. The defense worked well.
Game Three
Buckingham = 20 Chesham = 5
In this game Buckingham mixed up the teams to try and see if there was any combination of players and positions that worked that had not been tried before. This was a short game and Chesham started to get into a better rhythm for their game which put more pressure on the Bullets defense, which they handled well. The attack worked well as in the other two games but, the tackling in this game could have been better - the boys were getting a bit tired by this stage.
Over all this was a good start to the season but the Bullets were at an advantage as Chesham only have a small squad. Much of the play went very well, with some areas of improvement highlighted to be tackled over the next few weeks.
One final thing that says a lot about the depth that the Bullets have in the squad is that the games were played with 15 players in the squad, 10 of whom scored tries. All the new boys performed well and congratulations to the boys that won awards.
Share via
FacebookTwitter
https://www.pitchero.com/clubs
Recent news