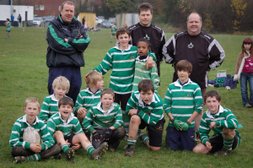 A big round of applause please for all those who braved the icy chill on Sunday to spectate on the exposed sports fields around the shire …ahem, thank you. (Okay, okay and those who got out of bed to actually play).

The Bullets, now in the U10 age group, have had a good start to the season coming out ahead in most of their competitive encounters. Credit must go to their coaching staff with whom they have developed into accomplished rugby players.
This weekend the Bullets met Milton Keynes on their old home ground, apparently the new club house will not be ready for a while yet. The Bullets were low on numbers but had enough to make a team. Every player played very well, tackling, rucking and mauling with excellent offensive runs contributing to the 11 tries scored by the Bullets in each of the two matches. In defense the Bullets did not appear to be tested but that was because of good early tackles smothering their oppositions ability to create any momentum and so prevented MK from even once crossing the try line. Congratulations lads, that was, as a Buckingham supporter, very good to watch.
Share via
FacebookTwitter
https://www.pitchero.com/clubs
Recent news