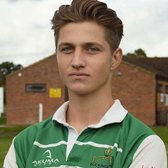 Massive congratulations to Max Nagy, formerly of Buckingham RUFC who made his debut for the Ospreys at the weekend, taking the field alongside lions Captain Alun Wyn Jones and the likes of Justin Tipuric, Max scored the last try for the Ospreys that you can see on the highlights.

Max came on for his Ospreys debut in the 65th minute and, with his typical run we have seen so often at BRUFC, went on his own for the last of Ospreys tries.

Max began his career in rugby with Buckingham RFC where he played all his youth rugby before taking up an opportunity with Northampton Saints and spending some time in New Zealand playing club rugby. Having moved to Swansea to study sports science he played for the University team, playing in the winning BUCS final. He signed for Swansea RFC whilst also being involved with the Ospreys Development Team. However, he always returned to his roots at BRUFC, playing for the first XV whenever he was available.

He was thrilled to be selected in the Ospreys squad to challenge for the Rainbow Cup and got his chance when he came on for Luke Morgan in the 65th minute. He was not to disappoint!