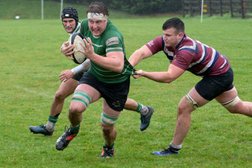 A (Good) Day at The Races

And so to Cheltenham. Just three weeks before the famous jumps racing festival, Buckingham literally blew into town to play Old Patesians at their alternative Prince of Wales ground near Prestbury Park. The hosts were expected to put plenty of hurdles in the way of the Green & Whites, and sure enough the fixture proved a real attritional stamina test, with the away side eventually running out splendid 22-29 winners.

OPs certainly had plenty of strong staying types in the pack, but Buckingham could field some big chasers of their own. These showed to particularly good effect in the scrum, where the visitors were dominant throughout, setting up tries for prop Matt Payne, flanker Jim Barker and old friend Penalty Try.

Conditions were atrocious, with a howling gale and the ground riding officially Heavy. But Buckingham had a clear race-riding plan, with front-running from the forwards, clever maneuvering from the half-backs and late finishing sprints from the three-quarters. The plan was superbly executed, in what was one of the team’s best away performances Your Correspondent has seen for many seasons. Wiggy Gurney’s first half try (very well converted by Ed Kinman) summed things up perfectly.

With home advantage, OPs would have been short-priced favourites at the off. But despite the unfamiliar course, by half time Buckingham were looking a good each-way bet (leading 5 -15), and they went odds-on as the game progressed. Under encouragement from captain Jamie Temple and vice-captain Ed Kinman, the Green & Whites really hit their stride in the second half. No use of the whip, and only a few reminders were needed. OPs on the other hand came off the bridle after sixty minutes and began to struggle under pressure (particularly after three successive grinding mauls from Buckingham’s forwards). Only a last minute try from the home side’s no. 8 and talisman brought the Purple & Blacks close to the (by now easing-down) visitors, earning a deserved bonus point.

There was a stewards’ enquiry of sorts mid way through the second half, with the referee quickly deciding to yellow-card Will Cooper for careless riding in the tackle. Maybe not a ten day ban for him, but Buckingham certainly went down to ten men for the last few furlongs. It says a lot for the quality of their performance (against the elements) that their lead was never seriously threatened.

Victory in the end then, by something of a canter (22 – 29), earning the Buckinghamshire raiders a try bonus point on top of four for the win. Not quite a bumper Cheltenham festival crowd, but the travelling punters, enjoying the friendly OP hospitality, certainly made their voices heard on the rails and in the members lounge afterwards. Where to next? Aintree?