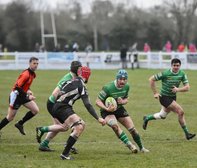 The teams emerged to a gloomy afternoon with a slight, swirling wind but the pitch was in very good condition.
After a minute’s silence for the recent passing of an RWB member, kick-off took place, with the wind still occasionally changing direction.
Buckingham made a bright start but within 1 minute conceded a penalty. From the resulting kick, RWB set up a good driving maul but a loose pass went straight into touch. After winning the line-out, Buckingham knocked on in a maul near their 22-metre line. At the resulting scrum, another penalty was awarded to RWB and they kicked to the corner. After winning the line out, RWB were penalised for crossing.
The penalty kick to touch was missed and then RWB were awarded a penalty for hands in the ruck, after 6 minutes, converted by the fly half, Cusack.
RWB were proving a handful at the scrums, and No.8 Wright did very well to tidy up, and give his team mates a chance to retrieve possession or give good service to scrum half Chalmers.
Possession swung to and fro, with both sides making errors.
After 14 minutes, RWB scored a try through tight-head prop Volavola, with the conversion going wide.
Buckingham had a good spell, going through several phases, before conceding a penalty for holding on in the tackle. Both sides then exchanged possession within the two 10 metre lines.
After 22 minutes, RWB were awarded a penalty for jumping across the line out and from the resulting line out, the RWB right wing, Davies, scored a try. Despite the wind now blowing straight across the pitch, Cusack struck another successful conversion.
Shortly afterwards, Buckingham, Hoey missed a penalty kick at goal.
There then followed a period of play with both sides making unforced errors, but shortly before half-time, Wright scored a try for Buckingham, which was converted by Gurney, making the score 15-7 to the hosts.
Within a minute of the second half, RWB scored another try through Hale converted again by Cusack.
After a good clearance kick from Horton, Buckingham were penalised and after the referee mistook Wright for Gurney, the latter was given a yellow card (an adjudged high tackle) and shortly after Temple, again a high tackle, so Buckingham were 13 for several minutes.
During this period of the game, both Lee and Ockendon were injured and replaced.
Another RWB try followed, scored by number 14 Davies, with the conversion missed by Cusack.
Both sides continued to swap possession until half-way through the second half when the RWB left wing, Douglas, was shown a yellow card.
Again, possession was swapped, and the resulting play was generally scrappy, but towards the end of the game, Buckingham scored a try through replacement, Robb and Gurney converted, and the game concluded with the hosts winning 27-14.
Against one of the pace setters in the league, this was not a discouraging result for Buckingham leaving them in 6th place.