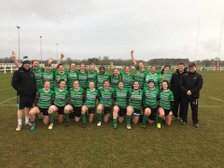 More success for Buckingham Ladies, as they win Championship Midlands 2

Sunday 15th March, saw Buckingham Swans travel across to Wymondham Rugby Club to play their final league game of the season.
The Swans went into the fixture 1 point clear of Kenilworth RFC in second place, who in turn had a far stronger points difference. In order for the Swans to win the league they knew deep down only a bonus point win was good enough.

After a 3 hour bus trip the Swans came out the blocks instantly. After only 5 minutes on the clock they had created multiple chances to score and finally managed to cross the line to take an early lead. The attack was relentless and by 15 minutes the score the 17-0.
Wymondham to their credit came back into the game with a try of their own, and a further length of the pitch run by the Wymondham open-side flanker meant the Swans knew they couldn't switch off. Going into half, part one of the job was complete, 5 tries were scored and therefore a bonus point in the bag, they just had to secure the win.

To the Swans credit, they kept on top and the tries kept flowing. Probably one of the best performances from the team all season, creating chance after chance and managing to convert a few off them, despite the weather taking a turn for the worse.
Final score 12-56

Forward of the match was Ellie Bradford, an outstanding performance at No 8. Carried well all afternoon and gave front foot ball for the backs to finish off.
Back of the match was Lauren McColl, despite a yellow for a high tackle, this was easily Lauren's best performance of the season. Unlucky not to score a couple more tries on the day. Great work ethic on the wing.

The future for the Swans is unknown, in terms of promotion/play offs as there is most likely going to be a restructure of the leagues next season. Watch this space!