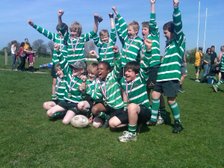 When we all saw our group with three of Buckinghamshire's strongest teams in it, we knew it was going to be a very hard day.

We got off to a winning start with a 20 to 0 victory in this game. The game was hard fought but the Bullets played some good rugby. We all knew that we would have to step our game up a level if we were going to win the festival.

We all knew this was going to be a very tough game as we have never had a victory against this team in four years of rugby.

The game was extremely hard and the boys dug very deep to keep the score down to a 10 to 5 loss. We started to play in this game a much higher tempo and put them under a lot of pressure which made this their hardest game of the day according to their coaches.

We have a long history with them and have always been of a very equal level of play over the years. This all changed today with a 0 to 30 victory to Buckingham. We simply blue them off the pitch with the match being stopped just after half time as the try difference had reached 6. This was achieved with a combination of power defence and strike running of the highest order. They only got out of their half of the pitch once in the whole game. We also used the tactics of ACV which proved to give the boys a focal point to their mental preparation for the games.

This we all knew this was going to be a very tough game as we have never had a victory against this team in four years of rugby and had had many big losses against them. The boys now had the bit between their teeth and applied a lot of pressure on them and had a great 10 to 0 victory.

They did not know what had hit them and had no response to the pressure of our rugby. Every time one of their players received a pass he was hit by one or two of our boys before he had even taken two steps. Under this kind of pressure they simply did not get into the game. This came as a big shock to them as they had considered us as the easy game in the group.

The same with this team as we have never beaten them in the past. This was a must win game for us because our other game results meant we could now take the lead in the group. This was one of the most hard fought games I think I have ever seem at this age group. We used all our pressure and ACV and they took all that we could throw at them but at the other end we had some of the best defence play I think we have ever played. We also used a new starting tactic that put them on the back foot and had some of the mums looking on wondering when their cute little boys had turned into proper rugby players. The difference in the game can down to a very well taken break that we converted from deep.

It now all depended on the result of the last game. In the end Buckingham and Beaconsfield both had 4 wins but Buckingham had scored a lot more tries so we took the championship.

I would just like to say that all the coaches are very very proud of the boys today and think that we played some of the best rugby that we have played in the last four years against 3 of the top clubs (Beaconsfield, High Wycombe & Amersham) in Buckinghamshire. All of them have over 50 boys in this age group. No-one can say that we had an easy ride to win the festival this year.

Also a big thank you to all the parents for bringing the boys along each week.