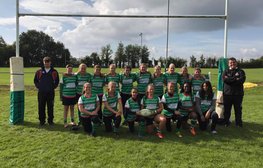 The end of the road for the Cygnets in the cup but a performance the girls should be proud of with several key squad members missing, playing against a strong and very well organised Harpenden XV.

The Cygnets started at pace and enjoyed the majority of the possession and territory in the opening 10 minutes. Our backs were moving the ball around well but were frustrated by a mixture of resolute defending and handling errors. The lack of a try from this pressure was compounded when Harpenden scored a breakaway try with pretty much their first touch of the ball. Far from being down-hearted however, Buckingham came straight back at their hosts and were rewarded for their endeavour when Tami broke through the Harpenden defence line to get back to within 2 points. We now very much had a game on with Harpenden starting to show their strengths. The remainder of the half saw both teams enjoying periods of possession with both defences being tested to the full, and a try a piece led to a half time score of 12-10 with Harpenden just in front.

The 2nd half was a very different affair with Harpenden's extra strength in the forwards really starting to show, winning several crucial scrums which kept the pressure on the away side. The home team also displayed some clever kicking which enabled them to clear their lines when Buckingham were just started to get on the front foot. Whilst the Cygnets were unable to convert their superiority into points at the start of the game, Harpenden very much took advantage of their start to the half and soon ran through with 3 answered tries as their opponents started to tire. A lesser group of girls would have buckled at this point but the Cygnets are made of sterner stuff than that and with rallying cries from the backs began to get back in the game. A typical driving try from Tami and conversion from Katie brought Buckingham back within 12 points with a little under 10 minutes to go giving the travelling supporters hope of a comeback. The Cygnets looked dangerous but handling errors would prove their undoing and they were unable to add to their total and deliver a grandstand finish. In the end it was Harpenden who finished the scoring after some typically tenacious defending by our girls.

The final scoreline probably flattered the home side and certainly didn't show how much the Cygnets put into this game. The squad depth was tested to the limit and every girl stood up to be counted. The loyal Cygneteers were left disappointed but couldn't have asked for more from their team. The cup run may be over but there is still much to look forward to for the rest of the season finishing off with the tour in May. Huge thanks as ever to Murray Bateman, Gary and Ethan Bussell for their hard work and a thought for Lisa Bussell and Christine Bryant who were slumming it in Rome whilst the rest of us froze in Hertfordshire!