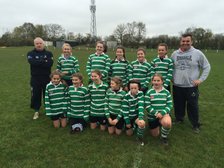 A very useful day for the U13s

The U13's had a mixed but really useful day at Old Northamptonians today in a triangular fixture with ON's and Peterborough. Both other teams had far larger squads so to enable us to play 10-a-side both ON's and P'Boro loaned us guest players. In the first game we went down heavily to a very good P'Boro side by 16 tries to 2 but we were extremely proud of the way the girls never gave up or let their heads drop. After watching how the P'Boro girls passed the ball quickly away from the breakdown and used the space, Buckingham learnt from this and scored good tries from Daisy and Georgia (ON's guest player) in the 2nd half.
There is an old saying that you learn more from defeats than victories and how true that was today. After working on a few things the second game against ON's was a different story. The girls showed some fantastic passing and offloading skills to score some great tries, winning 9-3. Try scorers were Chloe E x 3, Amy L x 3, Jess (guest player) x 2 and Libby (guest player). A great team performance but a special mention to Shannon who played her first match today and grew in confidence every time she got the ball and was unlucky not to score herself following some great carries.
The girls were all a credit to themselves and club - particularly in the way they welcomed and interacted with the guest players.
Thank you to ON's for organising the day and to ON's and P'Boro for the guest players, plus to all the parents for coming and supporting. Onwards and upwards to Harpenden next week !
Share via
FacebookTwitter
https://www.pitchero.com/clubs
Recent news