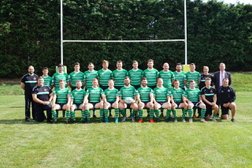 In their last home game of the season Buckingham produced what can only be described as a spectacular performance against third placed High Wycombe running up sixty points in a nine try romp which has never happened to their visitors in their last ten years of rugby.

Buckingham were superior in almost every key area. Hooker Seth Williams winning three strikes against the head at one stage. They were a revelation with the ball in hand, more incisive at the breakdown and better organised all round.

A large crowd of over two hundred bolstered by the attendees at the Vice Presidents Lunch enjoyed a sunshine afternoon as Buckingham tore into their opponents from the kickoff. Ben Cook in his familiar probing role set Tom Jones free to score the first try after only six minutes and the same player wrong footed the Wycombe defence again to score his second try both converted by Andy White for a healthy 14-0 lead.

However, minutes later the Wycombe pack rumbled over, the try being converted to remind Buckingham that they were in a game. This was as good as it got for the visitors as Buckingham took control. Williams’s strikes against the head keeping the home side on the front foot, and with Tom Amos, Jamie Temple and James Smith on the rampage, Jamie Lee got an excellent try, before a memorable try followed. A Buckingham winning ruck in mid field enabled White to hoist a high kick to the left wing where Jamie Hulston took the ball on the full outstripping his opposite winger to
score a superb try, White again on target.

Though a Buckingham forward was yellow carded soon after, Wycombe failed to make anything of their advantage with resolute defending keeping the line intact. Buckingham broke the deadlock and stormed down field, a break by Andrew Jackson supported by Jones sending prop Jamie Hartnett
galloping over, reward for all his hard work. White sending Buckingham to the interval with the extra two points and a 33- 7 score line.

Urged on by a slightly bewildered home support Buckingham kept up the pressure on Wycombe who now looking a well beaten side. White kicked a penalty to set the scoreboard moving again. The tries continued with the ball moved at pace all over the field. A neat chip By Ben Cook over the defence gave him an opportunist try, then another sweeping cross field move enabled winger Andy Turvey to scorch home in the corner.

From the Kick off the tiring Wycombe defence were unable to stop the rampant Buckingham backs running the ball straight back to score under the posts through Pat Ockendon, White again slotting over the conversion.

A mix up in defence allowed Wycombe their consolation try, but Buckingham were never going to be deflected from their task and good work by Ockendon enabled the home side to take up residence in the visitors twenty-two once again. A lineout on the right saw the backs at their best resulting in the final try deservedly scored by Jackson. Andy White’s sixth successful conversion made the score 60-14 to send the supporters into raptures at the conclusion of the game.