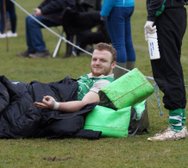 On an unexpectedly dry windless afternoon Buckingham met hosts High Wycombe for their 2nd league game; Buckingham having won at home. Although HW sit currently in the bottom half of the table, they, like Buckingham, have had some good results.

From the kick off HW knocked on giving an early scrum to the visitors. The open play that ensued led to a neat intercept by the HW centre, but, with no support available, his promising run ended in Buckingham’s favour, who, in turn, knocked on from the cross field pass that followed. This was to be the story of the first half with possession (although largely in Buckingham’s half of the pitch), knock-ons and penalties for various offences roughly shared.

However, it was the visitors who were to get the first score on the board coming from a poor kick to touch by HW which allowed for a pass back to the alert fly half Kinman to score out to the left and ably convert himself. Score 0-7

Ten minutes later injuries to two of the Buckingham players: Smith (ankle), Temple (shoulder) forced a reshuffle of the pack with Williams and Payne coming on. Working through some strong tackles by either side possession continued swapping with no-one gaining any real advantage until some good passing from a HW scrum led to their first try by the No.8 which went unconverted. 5-7

Next came a nice chip from Kinman and, despite some good defence, HW couldn’t keep the marauding Prime out for the first of his tries in the far right corner; Kinman teaming up with him again to nail the difficult conversion. Despite HW continuing to press this was to be the half time score. 5-14

Ten minutes into the second half, a Buckingham back rower was adjudged to have not released and, being a cumulative team offence, was shown a yellow card. With the visitors down to 14 men HW with a chip kick gave their number 3 a scoring chance which he took and was converted. 12-14

The HW lineout continued to misfire on occasion and was eventually duly rewarded by Buckingham gathering and passing to Prime charging through with 4 tacklers unable to contain him, for his 2nd try, finely converted by Kinman from out wide. 12 – 21

A great kick by Kinman from the restart, another wobbly line out by HW and, with full back Coxon getting into the act with a neat back flip pass to no 11 Taylor to carry forward and offload to the stalking Prime gave him his hat trick try and Buckingham their bonus point; this time the difficult conversion going wide. Score now 12-26.

The next score came from a superb drop goal by Kinman 12-29.

HW, however, had the final say when their no. 14 Sibu, an effervescent presence throughout the game, stormed through for a late well earned try in the far left corner which was unconverted. Final score High Wycombe 17- Buckingham 29.

Euan Prime’s hat trick earns him Man of the Match