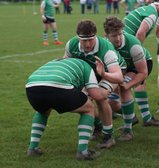 Buckingham Steal a result from a well drilled Thatcham side

Man of the Match - Jim Barker

Buckingham steal a game as a result of an excellent second half performance and turned round a 17 -0 deficit.
A cloudy sky threatening rain with a light intermittent breeze welcomed Buckingham to Thatcham. Buckingham looking to avenge last season's defeat 13; however, as Thatcham were the only team to beat champions Beaconsfield, they knew that this was going to be a difficult fixture.

Buckingham kicked off with the breeze but found themselves 3-0 down after 3 minutes having conceded 2 penalties for offside. This was going to be a feature of the first half with Buckingham's keenness drawing the displeasure of the referee. Buckingham responded with a period of possession and great pressure on the Thatcham line out. After two excellent lines run by Cooper and Lee, Buckingham thought they had scored against the base of the post. However, this was not to be. Misfortune continued when Buckingham lost Prime to the sin bin for a harshly adjudged high tackle and Cooper had to leave the field replaced by Billy Feast.

Thatcham forwards took advantage of the man advantage and scored a converted try. 10-0 to Thatcham after 25 minutes and Buckingham only getting ball deep in their own half; the signs looked ominous. Buckingham forwards were going backwards in the scrums but Matt London and Jim Barker were disrupting the Thatcham line out. Excellent defence by Matt Hawker kept Thatcham out but the resulting penalty was pushed wide by Thatcham just before half time.

At Half Time the excellent Stuart Tompkinson was replaced by Joe Kayll and Jamie Lee came off to be replaced by Tommy Hoey.
From the restart Thatcham put Buckingham under pressure in their 22 and a drive from their line out saw Thatcham extend their lead with a converted try 17-0.

Buckingham needed to change their tactics. Joe Chalmers had an excellent blindside break and spun down the backline for Ollie Crompton to score in the far left hand corner. 17-5.

Buckingham were energised and Jamie Temple made a number of drives through the centre. Thatcham appeared to be tiring. A catch and drive at the line out deep in the Thatcham 22 saw Jim Barker drive over for a converted try.

Thatcham responded but, with great defensive work by Charlie Gulliver, Buckingham held firm. A great overturn by Mat Payne gave Buckingham the ball. Kinman broke the line and offloaded to the ever present supporting Euan Prime who then fed Crompton who scored in the corner. 17-17!

Kinman then had the high pressure kick with only 2 minutes remaining, but he nailed the difficult conversion from the touchline to give Buckingham the lead. Thatcham frustration led to a red card for dissent and the restart being a penalty for Buckingham.
Buckingham held on for the win in a game that Thatcham should have won given the amount of possession but great spirit turned the result in Buckingham's favour.

Man of the Match was deservedly the irreplaceable Jim Barker and a good reward for his hard work all season.