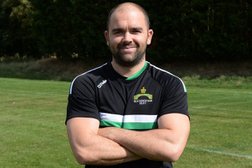 Buckingham claimed revenge for the defeat earlier in the season with a dominant 34-14 victory in very cold and windy conditions.The day had started with another very enjoyable Presidents lunch, which was attended by over 100 VP'S. The very impressive and affable guest speaker was Thinus Delport, an ex-professional rugby international, who entertained everybody with his stories of how he had to face the legendary Jonah Lomu and his unsuccessful tactics for handling the press.
After the lunch had been completed the game kicked off and Buckingham were soon on the scoreboard with a penalty following a ruck infringement.Wycombe came back strongly and after 10 minutes scored a lovely try through their centres. his woke up the slumbering beast that had been the Buckingham forwards and after sustained pressure and some good tactical kicking from Jak Cluness, Matt London went over for a powerful try from a line-out. This was followed shortly b another from the Buckingham forwards, Pat Ockendon this time crashing over from a scrum pick up. another excellent score followed from a driving maul from a line-out. The second of these tries being converted leaving the half time score at 20-7. There was some anxiety amongst the spectators fearing that this lead might not be enough as Buckingham faced the fierce wind in the 2nd half and it was thought that Wycombe may just pin Buckingham in the corner of the field.
As the second half started these fears were realised as Wycombe put Buckingham under real pressure in the far corner of the pitch. he mighty Buckingham forwards did not yield and soaked up the pressure for over 10 minutes, repelling numerous Wycombe attacks.Eventually the tables turned and after some powerful runs from Jim Barker and man of the mach Euan Prime, Tyler Green crashed over in front of the love shack to give Tiger a great view and alum Gillie added the extras. The game then became very scrappy with many penalties and players becoming frustrated with the stop-start nature of proceedings.Three yellow cards were issues in the middle of the half, one to Wycombe and two to Buckingham, leading to a converted try for Wycombe from a line-out drive in the 35th minute. Buckingham were not finished and following the kick off after a probing run from the hard to handle Joe Kayll and elusive Nick Sumner lead to a marvellous try in the corner for Phil Wright to dot down from Sumner's quick pass.
A great day for the Club and in particular for the irrepressible Matt Payne who received an engraved tankard after the game after winning 100 caps for Buckingham.