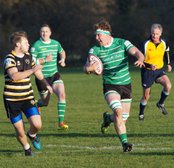 Buckingham welcomed Marlow in the knowledge that they would be facing a worthy challenge from a team siting one place above them and with confidence high following a sound away win against Aylesbury last week. Buckingham themselves however were keen to build on their own momentum following their win over High Wycombe. The result could decide which side achieved second place in the league, and was eagerly anticipated by the supporters of both sides, despite the blustery conditions.
Buckingham kicked off playing towards the road end with the benefit of the wind. Marlow managed to exit into the Buckingham half and the first scrum of the game took place just outside the Buckingham 22. Despite a tremendous first scrum where Marlow were marched backwards Buckingham failed to clear the ball out of their half, and after a couple of rucks Buckingham prop Stuart Tomkinson's effort to turn back time and revert to old fashioned rucking were penalised and Marlow converted the resulting penalty to take a 3 point lead.
Buckingham responded almost immediately with a great back row try when from a scrum on the Marlow 22 flanker Euan Prime, picked up the ball fed number 8 Jim Barker who powered forward slipping a pass to Pat Ockendon who kept the ball alive and returned the compliment to Jim Barker to ground the ball out wide. Th conversion attempt was missed leaving the score at 5-3 to Buckingham.
Buckingham continued to look dangerous with the ball and came closet scoring with winger Paolo Peschilsolido showing quick feet. But the next score waste go to Marlow when after a disrupted scrum the ball went loose hacked on by Prime then Chalmers ending up just running dead. From the resulting drop ut the ball was worked into the Buckingham 22 and from a line out Marlow used their potent driving maul being hauled down just short of the line but a penalty try was awarded, leaving the score at 10-5 to Marlow after 35 minutes of the first half.
Once more Buckingham responded swiftly and a fine wrap around move allowed winger Nick Sumner to get within 5 metres of the try line, Marlow relief was short after the Buckingham pack set up a driving maul before skipper Jamie Temple broke free and proved unstoppable as he touched down to score. Callum Gillie slotted the conversion to leave the score at 12-10 to Buckingham.
With the wind at their backs, Marlow managed to spend more time in the Buckingham half despite two kicks in succession sailing into touch on the full. It was Buckingham who scored next when following an acrobatic take by Ockendon at a line out the ball was worked away and after a succession of rucks and powerful runs from Barker and Kayla the stretched Marlow defence conceded a penalty in front of the posts which was calmly slotted by Gillie to make the score 15-10 to Buckingham.
The game hung in the balance as Marlow were awarded a penalty which was converted to bring the score seriously close at 15-13. Buckingham were then awarded a penalty which with groans from the crowd just sailed agonisingly wide.Buckingham did however manage to seal the win right in front of the home crowd with just over 30 minutes played of the second half. Following a break from their own half and a set of driving runs from the forwards a cross clearance kick from Marlow was brilliantly fielded by Gillie on the run and carried back into the Marlow half. Pick and drives from the tackle lead to a penalty. Against the wind and being confident of their scrum superiority Buckingham opted for the scrummage and Barker as he had done all game broke from the base and having sucked in the cover defence fed the ever alert Chalmers to score out wide.
The conversion was missed. Whilst this proved to be the final score of he game Marlow never gave up and subjected the Buckingham defence to a stiff set of character and resolve which was passed with flying colours, Jamie Lee and Stuart Cracker putting in big hits, matching those of the forwards who would not concede ground and remained defiant until the end.

Man of the match Joe Kayll