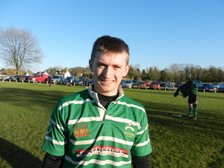 James Lambert runs in seven tries to help with another league win.

This East Midlands Winter Warmers league game that started with an impressive try from the Buckingham right winger James Lambert, followed by tries from the left wing Robin Gurnett, the backs were dominating with Mathew Harper center running in the third try. This was quickly followed by one from scrum half Andrew Reader.

The forwards secured good ball for the Buckingham backs, the game then turned in to a display of great ball handling, they shipped the ball wide to Lambert who ran in a further six tries, and his last was from behind his own try line, from a 5 meter scrum they spun the ball wide to give him the chance to sprint the full length of the pitch. Tim Norman helped towards the win with six conversions.

A Seven try romp from James Lambert help Buckingham 3rds to a 62 points to 45 win over Wellingborough OG’S and they stay second in the league.