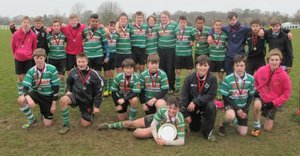 Just a quick note to everyone confirming our fantastic win in the final.

As we sat and talked in the changing room prior to the match about the game, I emphasised that this was going to be “the mother of all matches” Our opposition had a reputation for being exceptionally hard.

We talked about the need to play the game on our terms, in their half and to show the South of the County how good the North is.

We took the field and went through our normal warm up routine and as I held a tackle pad and took the first hit – I knew the Green Army were on form and about to put in the performance of the young lives.

The intensity was immense, the tackles could be heard across the other side of the pitch as we moved from phase to phase. All the areas that we had been working on in training came to the fore as the forwards rucked and mauled like their lives depended on it. The backs going through their moves, gaining possession pressing for the line time after time.

After 23 minutes it was still 0-0, such was the desire of both teams to win and not concede points. On 23 minutes, against the run of play Beaconsfield scored first and converted to go in 7-0 at half time.

The Green Army didn’t let this affect them and finished the half with their heads held high and determined to get back in the game. Sure enough within 3 minutes of the restart we were back on equal terms with a magnificent converted try.

We maintained our composure, didn’t let it affect our game and half way through the second half scored a brilliant converted try to go 14-7 up.

We finished on a high, pressing their line and were unlucky not to score more points.

The Green Army played their hearts out and defend better than I have ever seen them do, we had players collapsing on the floor from exhaustion as the final whistle went. I asked for everyone to give me their very best game and they met and exceeded my request each and every one of them

We deserved to win, we played some fantastic flowing rugby that Buckinghamshire can be proud of.

Boys you were truly amazing, a credit to the club in your game and your behaviour and yet again won many plaudits

Congratulations to the whole squad

This was always going to be a very tough game and so it proved.

For most of the first half we just could not get though their defence. We started well, but with the wind in our faces and the kicking game not working that well we struggle to make our mark. We gave them far to much respect in our defence and gave them room to run at us which proved our undoing and we went into half time one converted score down.

After a good half time talk and some player and position changes we came out a different team of boys and started to take the game to them and pinned them in their half of the pitch for long periods of the game. This gave us the momentum to start and work some very good attacking moves and to put their defence under a lot of pressure. This resulted in two converted scores in the second half of the game with our defence truely awesome.

I think to put it simply we wanted the game more and were more committed in playing the game in the right way to give us scores on the board.