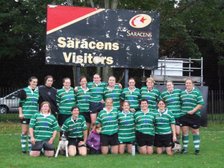 Buckingham Swans made the journey down the M40 on Sunday to take on a young, well drilled Saracens II XV for the second of their pre-season friendlies. Typical British weather provided torrential downpours as the game got underway making for soggy and difficult playing conditions.

The Swans started well utilising the experience gained against Wasps II XV in the previous week and worked hard to maintain a good defensive line early on. Saracens keen to demonstrate their skills were quick to capitalise on any loose ball to run in two tries in quick succession. Holly Malins made a promising chip and chase but was unfortunate to be caught just short of the line. However, Swans were sure to reply through the boot of Kelly Wallis, who added two penalties to get Swans onto the scoreboard.

Buckingham were unlucky to lose a player to injury and with a squad of 38 including several internationals, Saracens were able to introduce strong, fresh legs regularly, utilising this training match opportunity and running in further tries to maintain the lead. Buckingham were keen to increase their score before the break and exploited Saracens indiscipline close to the line. Excellent ball retention and good support play from the pack saw Jayne Webster touch down for Buckingham’s first try.

Following the break, Buckingham fought hard to maintain their defence and succeeded in keeping Saracens at bay for a long period of the second half. Although Saracens continued to push forward and were able to maintain a strong force against the gradually tiring visitors. Running in a further three tries in the second half Saracens took the final score to 70 – 11. A well fought game and excellent team effort from the whole Buckingham Swans team. Women of the match were Holly Malins and Kirsty Haig.

Following their series of pre-season friendlies against Wasps II XV and Saracens II XV, Buckingham Swans will now take on Team Northumbria in the first of their Championship North 1 league fixtures at home on Sunday 11th September.