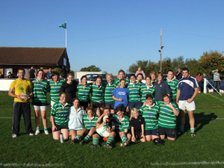 Buckingham claimed their second victory of the season after a triumphant win over Moseley last Sunday, the Swans were keen to keep the winning streak going. A beautiful warm sunny Sunday afternoon laid host to Swans versus Nottingham in the second league clash.

From the start the teams proved to be evenly matched with both sides struggling to break the defence. Several penalties were fought and lost and a constant battle for possession left either team fighting for the chance to break the deadlock. The opportunity arose for the Swans when Dee Turner pounced on a loose ball and sprinted in to score under the posts. Nikki Pullan added the conversion. Nottingham battled on determined to score before the break and they were awarded a scrum 5 metres from the Buckingham line. Excellent scrummaging allowed the ball to be released to the backs allowing the Nottingham centre to utilise the overlap and crash through the space. The missed conversion left the game 7-5 going into the break.

Swans made a few changes at half time and a few positional swaps saw the team dynamics change but they continued to fight. Buckingham had several opportunities with some excellent running from the centres who were unlucky to not to increased the lead further. Both packs worked hard in the loose to keep possession and succeeded with several turnovers but were unfortunate not utilise this possession. Nottingham always looked threatening but the only danger in the second half was from a breakaway runner who was tackled 10 metres out to ensure Buckingham remained in the lead. The game ended 7-5.

An excellent performance from both teams with some strong defensive work. Women of the match were Sophie Lepper and Dee Turner. Buckingham Swans continue their league fixtures away to Cambridge on 17th October.