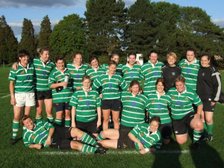 Buckingham made the trip down the A14 to visit last season’s league winners Cambridge. In search of another win, Buckingham were keen to continue their winning streak. Dry conditions and a team reshuffle made for excellent viewing and a hard fought game.

In the first half both teams looked evenly matched with neither being able to break the gain line. Buckingham dominated the forwards with excellent scrummaging and turnovers at the breakdown providing a platform for the back line and preventing Cambridge any decent possession. However, Cambridge provided the first opportunity giving away several penalties deep into their 22. The first quick tap and go proved unsuccessful with an unfortunate knock on but Swans undeterred continued to pile on the pressure in the Cambridge defence forcing them to make errors. Shortly after, a much better choreographed tap and go combined excellent recycling of the ball, releasing the backs and enabling Jo Godfrey to score in the corner. This left the score 0-5 at half time.

Into the second period Buckingham were keen to increase the lead and wasted no time working their way towards the Cambridge try line. A good strong scrum on the 5 metre line and excellent control from No. 8 Kelly Wallis allowed her to touch down for Buckingham’s second try. The missed conversion left the score at 0-10 to the visitors. Buckingham continued with the pressure from the restart and looked promising to increase the scoreline further but the referee deemed the ball to be held up. Cambridge fought back and continually tried to push through the Buckingham defence but two excellent try-saving tackles from full back Jo Godfrey and hard work from the wingers ensured Cambridge could not get through. Cambridge pressured the Swans in the closing minutes but Buckingham remained strong a maintained a well deserved clean sheet. The game ended 0-10. Woman of the match were Bec Bray and Kirsty Haig.
Jo Godfrey was selected as woman if the match by the opposition.