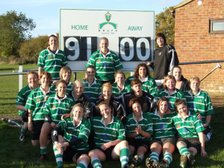 Swans make it four in a row

Buckingham Swans were keen to sustain their winning streak and make it four in a row as they took on Shelford Ladies at home on Sunday and they did not disappoint with a triumphant 91 – 0 win.

Buckingham took an early lead through some excellent handling and drawing players in to allow Kim Nash to run in the first score. Shelford tried to retaliate but good work through the forwards saw Kirsty Haig touch down for Buckingham’s second. This was shortly followed with some excellent running from winger Becky Pearson who scored under the posts taking Swans into a 15 – 0 lead.

Good hands and strong running saw Kim add another try to the tally. Bec Bray added the conversion. Within minutes strength and determination saw Kelly Wallis plough through the Shelford defence. Bray converted. Shelford undetermined put the pressure on and forced their way into the Buckingham half. They looked likely to score but an excellent try saving tackle from Jo Godfrey ensured the try was held up and Buckingham maintained their clean sheet. Just before the break Swans were awarded a 5 metre scrum. A good drive from the pack and a pick and go from the No. 8 saw Kelly Wallis add another 5 points to the tally. Bray converted leaving the score at 36 – 0.

After the break Swans were keen to capitalise on their first half performance and wasted no time in forcing their way into Shelford’s half. A clearance kick by fly-half Dee Turner was chased down by Becky Pearson and supported by Dee who went over for her first try. Shortly afterward excellent scrummaging from the Buckingham pack enabled Kirsty Haig to score her second try. From the restart Buckingham gathered the ball and released Kim Nash to run a 50 metre sprint down the line taking the score to 51 – 0.

The 50 minute mark saw changes to the pack and a re shuffle in the backs. With the new formula working just as well as Becky Pearson ran in a further two tries and full back Jo Godfrey added two. All four were converted by Nikki Pullan.

Good handling and exceptional support play saw further tries from Sara Daniel and Fenella Houlston to round off a fantastic performance from the Swans. Nikki Pullan converted the latter. Women of the match were Kelly Wallis and Fenella Houlston. The Swans are now preparing for their next game away to Stoneygate on 31st October.