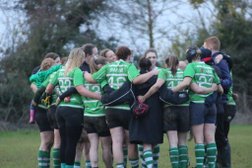 After a confident cup win last Sunday it was back to league business with the Swans facing Moseley in a mid table clash. The first half started well for the Swans having over 70% possession and asserting their dominance in the scrum. Becca Herring, playing only her second game for the Swans after turning 18 in September, showed her quick thinking and fast feet to open the scoring in the corner. The forwards carried on their hard work from last week with good yards being made by Lorna Cooke and Katie Upton, allowing the backs to put themselves in good attacking positions. Sadly these attacks did not prove fruitful but it showed what the backs could do with ball in hand.

The end of the first half saw two serious injuries for Moseley but this did not deter them and they came out fighting for the second half, putting the Swans under significant pressure which led to an unconverted try for the opposition. Swans continued to dominate at the scrum, which allowed the platform for fly half Amy Jones to send Katie Clark crashing past 3 defenders to score under the posts, Clark converted. Continued pressure from the pack led to a brilliant pick and go try from Swans’ number 8 Charlotte Dennis. Swans final try was set up by back of the match Clark who seeing the space behind the Moseley back three kicked a beautiful kick, which was collected by Captain Holly Malins who scored under the posts. Clark Converted.

Moseley fought back and scored two tries in the last 5 minutes, including one straight off the training ground, in the last play of the game. Final score Buckingham Swans 26 – Moseley 20.