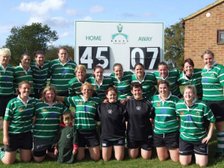 Buckingham played hosts to Team Northumbria on Sunday in the first of their league fixtures in Championship North 1. Warm-up friendlies against Wasps and Saracens in previous weeks ensured a challenging start to the season.

Buckingham made a strong impact in the opening minutes with some excellent handling to release full-back Holly Malins to score under the posts. Kelly Wallis added the conversion. Team Northumbria retained their composure to keep the Swans out of the 22. Before the end of the first quarter Swans capitalised on a quick tap and go penalty and excellent recycling of the ball allowed Kelly Wallis to touch down, also adding the conversion. In the closing minutes of the half Swans continued to pile on the pressure and Holly Malins added her second. Wallis converted leaving the scoreline 21-0 going into the break.

Following the half way break both teams seemed evenly matched and Team Northumbria showed signs of penetrating the Swans line and were unlucky to be held up which demonstrates the strength of the Swans’ defence. However Team Northumbria were at a disadvantage after a player was sent to the bin following a high tackle. Utilising the overlap Swans maximised the speed of the back line which allowed replacement winger Sam Cleaver in for her first try for the Swans and the fourth of the game. Wallis converted. Shortly after quick recycling of the ball and excellent handling saw Wallis score a further two tries to secure a bonus point and a hat trick.

Team Northumbria, after gaining their player back from the bin capitalised on a tiring Buckingham side to make an excellent break into the Swans’ 22 and were rewarded to touch down under the posts for a converted try. Buckingham determined to have the last say in the game and highlighting their dominance throughout responded with a final try to make it a hat trick for Holly Malins. Wallis converted leaving the final score at 45-7.

An excellent start to the league for Buckingham Swans with strong work from the pack, excellent running from the backs and a dominating presence on the field overall. Women of the match were Carole Gibbs, Kelly Wallis and Holly Malins. The Swans are now preparing for their first away fixture to Altrincham Kersal Sunday.