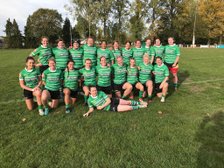 Swans travelled to Bletchley for the first of their three encounters this season. With a steady start and a series of disciplinary errors Bletchley secured the first points of the game with a penalty from the boot of Caroline Collie. Swans rallied with their dominant forward pack, with strong running lines from Elaine Addy and Chloe Allcorn it wasn’t long before Lorna Cooke crossed the line for the first of five tries. After a series of creative play and line breaks from the backs on both sides it was Kelly Gell who crossed the line next from a well held pass delivered by Swans fly half, Lois Capon. Bletchley fought back hard, utilising their strong forward pack; crossing the line after a succession of well executed pick and go’s. Just before the half time whistle, once again Swans excellent scrummaging provided the perfect platform for the Bucks back line to execute a well-rehearsed play and Lois Capon to hold her line, beating two defenders to score just right of the posts. Kelly Gell added the extras to leave the score at 19-8 heading into the second half.

It was Bletchley that took first blood following the break with another well-placed penalty. A string of ill-discipline from Bletchley allowed Sophie Ryder to cut through the Bletchley defensive line to score under the posts; Kelly Gell converting again with the score standing at 26-11. Handling errors littered the second half for both sides, resulting in a succession of scrums. This allowed Buckingham to dominate, gaining important yards with Chloe Allcorn scoring second phase from a 10metre scrum to dot down in the corner securing the bonus point win.

The final score of 31-11 leaves Swans sat at the top of the table after the first three fixtures. With a long season ahead, Swans welcome Kenilworth RFC for their first encounter after being promoted this season. Sunday 14th is set to be an exciting and historic day as it is the first time Buckingham Swans have fielded two senior women’s teams, hosting their first ever double header. The development fixture against St Neots kicks off at 12:30 followed by the Kenilworth league fixture at 14:00; so please come down and support the ladies in green and white.